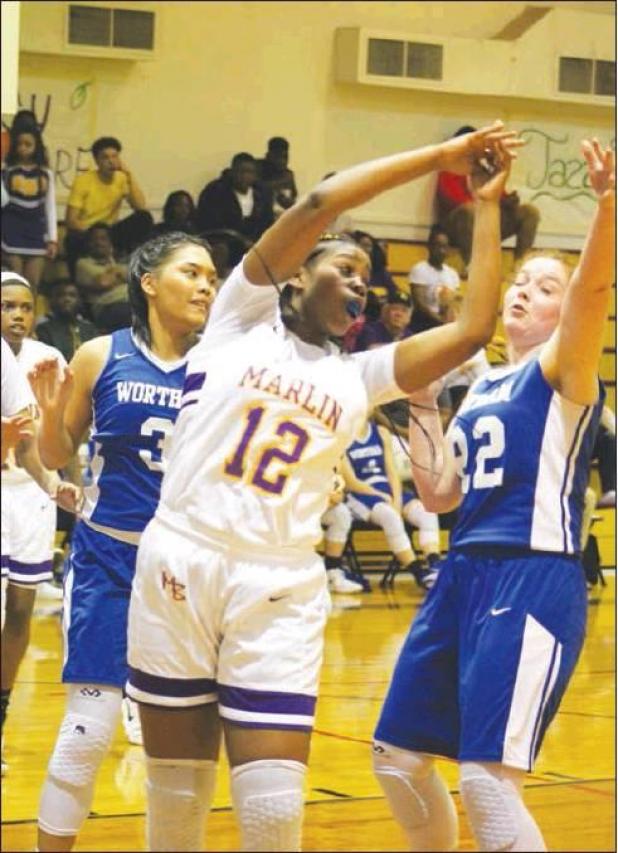 Marlin’s Danielle Noble (12) fights for a rebound against Wortham in a game last week. The 5-foot-11 junior averages 8 points and 10 rebounds per game.

After the Marlin girls’ basketball team lost to Mount Vernon in the UIL Class 3A state championship game last season, Coach Lawrence Gullette told his team, “We’ll be back.”The Lady Bulldogs embarked on that return journey Tuesday when they opened their postseason with a bidistrict game against Valley Mills at Waco University High School. Marlin entered the game with a 25-6 overall record and ranked No. 14 in the Texas Association of Basketball Coaches (TABC) Class 2A poll.The Lady Bulldogs blew through District 18-2A with an unblemished 14-0 record.

They dominated the competition. Their closest district games came against Axtell, who they defeated by 28 points in the opening district contest and by 30 points in the second round. Their largest margin of victory was 75 points against Bremond. They also won three other games by more than 60 points.During district play, the Lady Bulldogs outscored their opponents 982-269. That computes to an average margin of victory of 51 points, 70-19.Marlin’s best defensive effort came in a 53-7 victory over Hubbard. In addition, twice they held opponents to eight points in a game.

Three times they gave up just 12 points and once they allowed 13 points. Overall this season, Marlin has averaged nearly 61 points. They have three players averaging in double figures, led by Mystique Womack. The 5-foot-9 senior guard averages 20.5 points per game. She shoots 40 percent frm the field. However, she shoots 52 percent on two-point field-goal attempts.Womack leads the team with 89 three-pointers made and shoots 29 percent from beyond the arc. She also has made a teamleading 85 foul shots and shoots 65 percent from the charity stripe. In adddition, Womack averages a team-leading 4.4 steals per game.