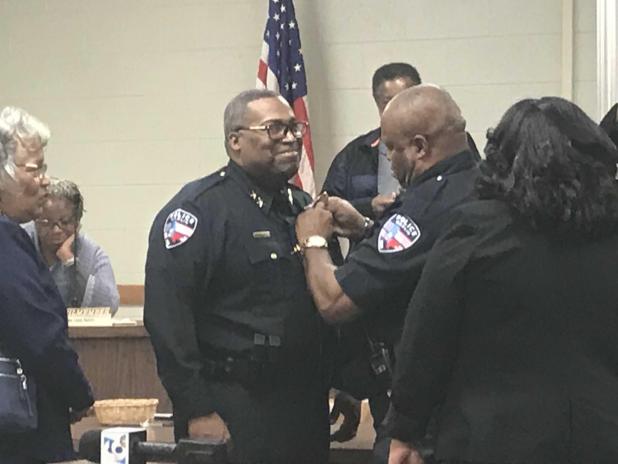 Lawrence McCall was sworn in as the City of Marlin’s new Chief of Police on the evening of Dec. 3 during a special meeting of the Marlin City Council.

“I, Lawrence McCall, do solemnly swear that I will faithfully execute the duties of the office of Chief of Police of Marlin, Texas, of the State of Texas, and will to the best of my ability preserve, protect, and defend the constitution and laws of the United States and of this state, so help me God,” were the words spoken over the courtroom.

McCall comes to Marlin from Dallas County, where he was a constable in Precinct 1 for 12 years.

Along with years of service to various communities in and out of Texas, McCall has multiple degrees. He has both a Bachelors and Masters Degree in Criminal Justice from National American University, along with a Doctor of Education (ABD) in Organizational Leadership in Organizational Development from Grand Canyon University.

His extensive resume supports his declaration to bring leadership, training, and understanding to the Marlin Police Department. He plans to revamp from the inside out and to introduce the aspects of community policing to both the department and the community.

McCall was surrounded by co-workers, new and old; friends; and family as he was welcomed to Marlin.

The council also discussed a previously tabled item of authorizing City Manager Cedric Davis to search for grants and write resolutions pertaining to such grants for the mayor to sign off on.

This came up after realizing that the deadline for grants, Dec. 6, would not leave enough time to bring each resolution before the council for approval and he did not want to hinder the city from receiving any possible grants.

If received, these grants would go towards building materials, such as windows, doors, and roofing, with the goal of helping get 50-100 Marlin homes taken care of.

The council approved this item, but information concerning the grant(s) amount(s) or whether funding will be received has not been released at this time.